One of the most popular and famous of the potters who made Satsuma style pottery was Makuzu Kozan. Born in 1842, Kozan was one of the Kyoto pottery experts who made the Satsuma style famous around the world and his works are still considered to be of the finest quality.

Although he was not one of the original potters from the initial Satsuma kilns, his artistic stylings and craftsmanship have made his pieces very

from his father, who owned a very successful workshop in Kansai, Japan, Kozan had not been expected to take over after his death.

However, his skills in painting that were learnt from the age of 9 onwards took him in that direction. The story goes, that the young Kozan was asked to create a pot for washing brushes by his painting master, Giryo.

When Kozan carved an intricate dragon pattern that would only show when the dark inky water seeped into the carved areas, his father was so impressed that he took the pot and fired and glazed it himself, then taking Kozan into producing more pieces.

consisted of small items of tea sets and equipment, right up to sets of 50 bowls, all decorated with red and gold and arranged on a shelf for display. His work during the Meiji period in Japan became his most popular.

It has been said that, although Kozan was from a more modern time, he strived to created pieces that were in the stylings of older Satsumaware.

This may also lead us to the reason why some of his works are not marked at all, possibly trying to make them look more antique and more like "old Satsuma".

this mark on his character (around 1870), the majority of his pieces after that period do have his name on in an attempt to ensure that his works were recognised for their superior quality.

I found a beautiful Lobster Satsuma Bowl and it has a gold foil mark I can figure out. I tried (often use) Gotheborg and love your blogs….but I have not seen this mark reference. 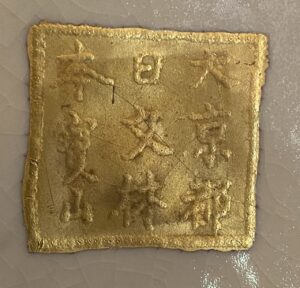 Hello, I am in need of assistance regarding the marks on a set of Japanese porcelain items. Your help is much appreciated. 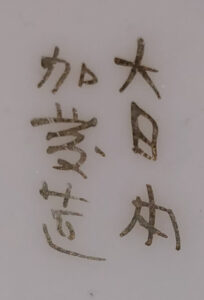 I would like to know if this one is a genuine Kozan. thanks a lot, best regards. Ash

Hi is this genuine if so what is it ? Cheers Ian

The two marks you show are not those of Makuzu Kozan, but rather Kōzan of Kyoto, who made highly detailed and heavily gilded wares. Much scholarship has gone into the marks used by the great man himself and by his kilns, notably that by Mr. Seki in Kyoto and, of course, Louis Lawrence and Gisela Jahn. Perhaps a quick consult with one of their books this topic might be of use.

Leave a Reply to B. Feuless Cancel reply