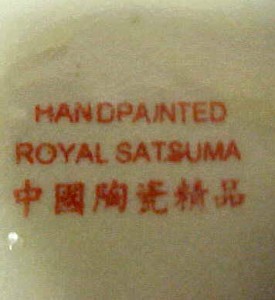 When you begin to collect or become interested in Satsuma Pottery, you may come across several terms that you are unfamiliar with. One such term which can also be misleading is "Royal Satsuma".

The term "Royal Satsuma" refers to the type of Satsuma Pottery that was mass produced to be sold abroad. It is also possible that the piece of pottery was even made in somewhere like China too - such was the demand for Satsuma style pieces after they were made known to the world.

If you have a piece of pottery that is marked "Royal Satsuma" on the bottom, then it is certainly not an authentic piece from Japan. It could have been made in Japan, but it will not be a proper antique. It was not until the late 1940's that potters in Japan began to use English to mark their work.

As a rule of thumb, when buying or checking any pieces of "antique satsuma pottery" if it has ANY english words on, then it will certainly not be from the Meiji Period. Also, anything sold as "Royal Satsuma" will not be from a Japanese Royal palace or have belonged to the Emperor - it will most likely not be from Japan at all.

However, these pieces are very beautiful and are collectible and can fetch a good price if they are in very good condition.  Just make sure you are fully aware of what you are buying before spending money on what appears to be an antique piece, which many sellers claim them to be.  Many people who contact me regarding pieces they have been given or bought have this style of Satsuma and the information that it could be next to worthless in terms of value, can be bad news to give.

You can read more on valuing a piece you own here on one of your recent articles.